On this page, we provide information about merging branches together, as well as rebasing branches (i.e. putting all the commits in a branch on top of another branch).

Merging is the process of combining two Git branches together. It can be done either from the Git GUI (our recommended method), or from the command line.

Merging with the Git GUI

The easiest way to merge branches is by using the Git GUI. Follow these steps:

(2) Checkout the target branch—the branch into which you will merge another branch. In this example, let's assume that we will be merging into the master branch, so we would check out master.

(4) A dialog box will appear. Select the branch that you would like to merge into the target branch—which in this example is master. 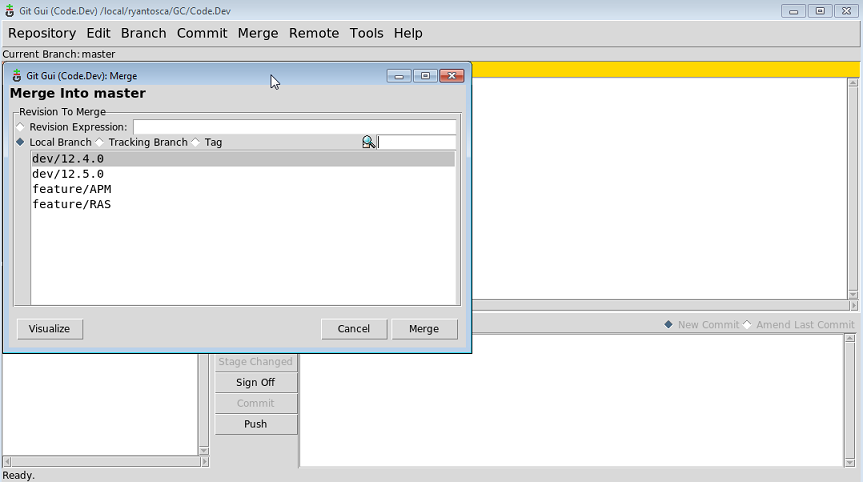 (6) View the revision history. You should see the two branches merged together.

Resolving conflicts caused by a merge

Sometimes you may encounter conflicts when merging one branch into another branch. This can happen when you are merging code from an older GEOS-Chem version into the latest version. A conflict is just Git saying, "I found some code in a place where I didn't expect to find it. Can you help me figure out which lines of code to keep and which to throw away?"

When you encounter a conflict, open the git gui window. You will see each file containing a conflict listed in the Unstaged Changes window. Clicking on each file will display the lines of code where the conflicts are located. You will see one or more slugs in the file. A slug is a block of text that displays the source code from the old branch and the new branch.

At the top of the slug you see the string <<<<<<< HEAD followed by some source code. This is the "old" code, i.e. the code that existed as of the last commit. A separator line ======= then follows the source code.

To resolve a file containing conflicts, do the following:

Once you have resolved the conflicts in each file, you can commit them back into the repository.

Rebasing is a special type of merging, where your commits are placed at the head of another branch. For more information on rebasing, please see these resources: