Previous | Next | Guide to GEOS-Chem simulations

On this page, we provide information about GEOS-Chem simulations that use chemistry mechanism solver code built by the Kinetic PreProcessor (KPP).

The following table provides links to information about the available full-chemistry mechanisms in GEOS-Chem.

Updates to the fullchem mechanism

Updates to heterogeneous and cloud chemistry

These changes are described by Holmes et al. (2019). The effective radius and surface area of ice cloud particles have been updated based on aircraft observations (Heymsfield et al., 2014). Entrainment-limited uptake in clouds, as defined by Holmes et al. (2019), is implemented. This method accounts for cloud fraction and entrainment within the chemical loss rates. Losses of NO3 and N2O5 in clouds are currently included and the method and code can also be applied to other species that react in clouds. The changes in the cloud and ice surface areas had significant impact on the cycling of HCl to ClOx species increasing them in the UT.

N2O5 uptake on sulfate-nitrate-ammonium-organic aerosol is calculated with gamma for combined SNA+ORG aerosol in in which a SNA core is coated with an organic shell (McDuffie et al. 2018b). Parameters in the gamma expression are fitted to aircraft observations. This parameterization generally follows the Bertram and Thornton ACP (2009) functional form for SNA aerosol (excluding chloride enhancement) and treats aerosol organics as a resistive coating. The gamma values of SNA and ORG components are calculated separately and combined using a resistor model framework: 1/gamma_total = 1/gamma_SNA + 1/gamma_ORG. The ClNO2 yield is currently treated as 1 on sea salt aerosol and 0 on SNA+ORG aerosol. Planned updates to chlorine chemistry will modify the ClNO2 yields in a future model version.

The gamma for N2O5 uptake on other aerosols is updated according to IUPAC and JPL recommendations, as documented by Holmes et al. (2019).

NO2 and NO3 uptake on aerosol

Gamma parameters are updated according to IUPAC and JPL recommendations, as documented by Holmes et al. (2019). Notable changes compared to prior model versions include reduction of NO2 and NO3 gammas on all aerosol types,

Within the heterogeneous chemistry, we now use the aerosol water content of sulfate-nitrate-ammonium aerosol from the ISORROPIA II aerosol thermodynamics. This water content is then used to infer the volume and surface area of sulfate-nitrate-ammonium for heterogeneous chemistry. The aerosol optics used for FastJ and RRTMG continue to use lookup tables for hygroscopic growth so that the optical properties (phase function, index of refraction) are consistent with the assumptions about aerosol composition and size.

As the code is off by default no notable changes are expected in the model's output. To reproduce the results of Kasibhatla et al 2018, updates to nitrate partitioning (e.g. from Xuan Wang's chlorine updates) and updates to the heterogeneous uptake and hydrolysis of NO2 need to be included as well.

This document compiled by Katie Travis and Josh Cox describes the updated isoprene and monoterpene chemistry to be included in GEOS-Chem v11-02c (also see the list of modifications below). These updates include the monoterpene nitrate scheme and aqueous isoprene uptake and were originally implemented for simulation of the SEAC4RS data.

Modifications to the original updates

For wetdep of H2O2 we should restore the old Henry’s law constant of 8.3E4exp[7400(1/T – 1/298)] because as Dylan points out that’s the physical value. For drydep of H2O2 we can keep the value of 5E7 as parameterized by Nguyen to fit his drydep data.

(3) The following species have different names from the original document:

(4) Fix typos in the original document

Linoz only applied to ozone. The simple linearized stratospheric chemistry, which uses production and loss rates archived from the GMI model, is applied to all other species. (NOTE: The user has the option to disable Linoz and use the archived GMI prod/loss rates for ozone, but this is typically not done.)

In GEOS-Chem v10-01 we added the Unified tropospheric-stratospheric Chemistry eXtension (UCX) mechanism into GEOS-Chem. UCX was developed by Seb Eastham and Steven Barrett at the MIT Laboratory for Aviation and the Environment. This mechanism combines the existing GEOS-Chem "NOx-Ox-HC-aerosol" mechanism with several new stratospheric species and reactions.

Katie Travis created a diagnostic to correct daytime ozone and HNO3 values from the lowest model layer, ~60m, to a user-defined altitude such as 10m (which corresponds to the height of certain observational instruments at surface stations). This altitude can be selected in the DEPOSITION MENU of the input.geos file.

Ra(z1,zC) is calculated to the lowest model level in GeosCore/drydep_mod.F. We recalculate Ra using z1 = user defined height (such as 10m) for ozone. The new Ra is added to the diagnostic array AD_RA and passed to diag49.F for use in Equation 1.

This new diagnostic has been implemented in as the ConcAboveSfc collection of the GEOS-Chem History diagnostics. 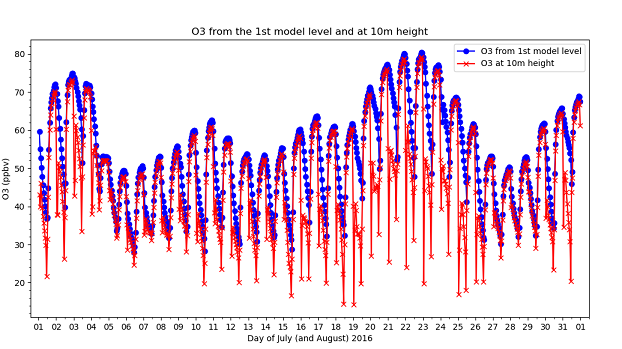 Barron Henderson has created a software package for process analysis diagnostics. He writes:

Process-based Analysis examines the change in each species due to each process and reaction. Models predict atmospheric state, which in a time-series can be used to create net-change of each species. What this cannot tell us, is which processes led to that change. To supplement state (or concentration), GEOS-Chem has long archived emissions and employed advanced diagnostics to predict gross chemical production or loss. Process Analysis goes a step further archiving grid-cell budgets for each species, and decomposing gross production/loss into individual reaction contributions. Process Analysis extensions are currently available in CAMx, WRF-Chem, CMAQ, and now GEOS-Chem. This allows for direct comparisons of models at a fundamental, process level.

Barron Henderson has created Python software that will let you translate GEOS-Chem output to the proper speciation for input to CMAQ. Please see our Linking GEOS-Chem to CMAQ wiki page for more information.

Previous | Next | Guide to GEOS-Chem simulations