As with the latest version of GEOS-Chem, NetCDF libraries must be installed (see Installing libraries for GEOS-Chem). The code should be compiled using the compile switch RRTMG, i.e. make RRTMG=yes. A fresh compilation after a make realclean will take 15-20 min (subsequent compiles are much faster).

Finally, the ND72 diagnostic must be set to 1 if RRTMG is switched on.

Once all the auxiliary files are in place (new optics data files, surface albedo climatologies, trace gas profile climatologies) and the input.geos set up, the model can be run in the usual way. 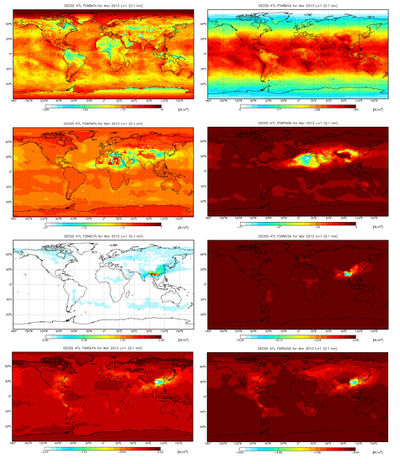 This issue is slated to be fixed during the GEOS-Chem v11-02 provisional release period.

Compiling RRTMG with GNU Fortran can lead to an internal compiler error. This may be an issue that the developers of RRTMG (AER, Inc) need to resolve.