On this page we discuss the land map from Jennifer Olson that is currently used by the GEOS-Chem Dry deposition and Soil NOx emissions modules.

The Olson 2001 land map is described at this website.

The Olson 2001 landcover map is at a native resolution of 1km x 1km. I've identified the dominant vegetation types in each 0.25° x 0.25° degree gridbox and use this as input to GEOS-Chem.

There are also new vegetation types that are defined in the Olson 2001 data set from 1-74 that were previously listed as "not used" in drydep.table. These are assigned appropriate deposition ID # and z0 values.

Vegetation types that are listed as "not used" in the updated drydep.table dataset are those that are not dominant at 0.25° x 0.25°, but may be present in the 1km x 1km data set.

The largest differences to O3 dry deposition flux for a 1-day run in June 2007 at 4x5 degree resolution include the US, and the western portion of South America. 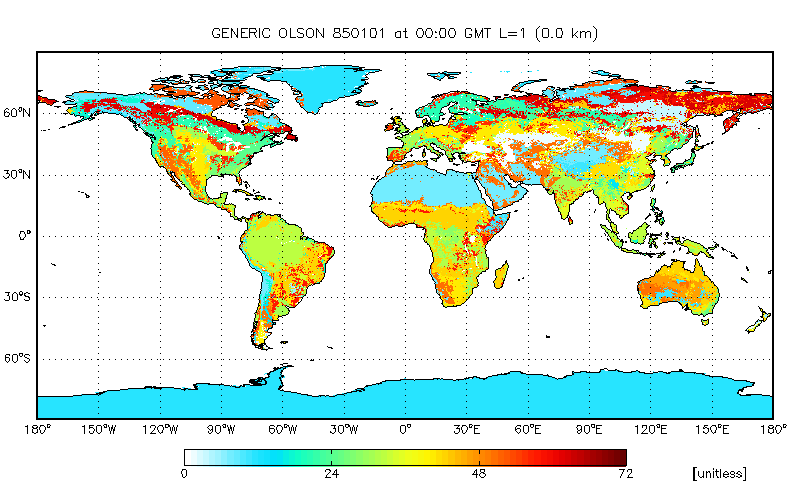 Also, we will not create vegtype.global files for the Olson 2001 land map, but will instead compute the corresponding values of the IREG, IUSE, ILAND, etc. arrays on-the-fly, as described in the next section.

This update was tested in the 1-month benchmark simulation GEOS-Chem v10-01a and approved on 05 Feb 2014.

Patrick Kim implemented updates to improve dry deposition of ozone when using the Olson 2001 land map. For a full description, please see this post on our Dry deposition wiki page.

Modifications for the grid-independent model

The Grid-independent GEOS-Chem project seeks to interface the GEOS-Chem model directly into a General Circulation Model (such as NASA's GEOS-5 GCM). In order for this to happen, much of the existing GEOS-Chem source code will have to be restructured. The GEOS-Chem Support Team is actively working towards this goal, which involves both (1) building a new interface that will link GEOS-Chem to a GCM, and (2) removing legacy code that will hamper grid-independent functionality.

During a recent test interfacing of GEOS-Chem with the Beijing Climate Center's CAM/GCM, we discovered that the existing vegtype.global files (and the corresponding rdland.F routine) was not compatible with the GCM, for several reasons:

To this end, we have created a new GEOS-Chem module olson_landmap_mod.F90. This module, which replaces the rdland.F routine, does the following:

Also, certain ASCII input files to the dry deposition modules, such as:

have been replaced by netCDF files in order to facilitate file I/O by external GCM's.

In this section we provide information about issues with the Olson land map code that have since been resolved.

Speed up computations in subroutine COMPUTE_OLSON_LANDMAP

We have added a fix to speed up the computations in the parallel DO loop in routine COMPUTE_OLSON_LANDMAP. These computations are used to generate the arrays IREG, ILAND, and IUSE—which GEOS-Chem's legacy dry deposition module require as input—from the data in the Olson land map netCDF file.

We made the following source-code modifications:

(1) Add this section of code to the variable declaration section of subroutine COMPUTE_OLSON_LANDMAP:

(2) Add the code !$OMP SCHEDULE( DYNAMIC ) to the OpenMP parallel loop declaration. This will tell each CPU to grab the next available grid box in the array. This will improve the load balancing of the loop.

(3) Modify this section of the parallel loop. The code should now look like this:

These modifications will skip calling the subroutine GET_MAP_WT unless:

By restricting when subroutine GET_MAP_WT is called in this way, we reduce a substantial amount of overhead. Profiling results with the Tuning and Analysis Utilities (TAU) have shown that this can result in a 100X speedup in execution time for COMPUTE_OLSON_LANDMAP, as shown by this figure. 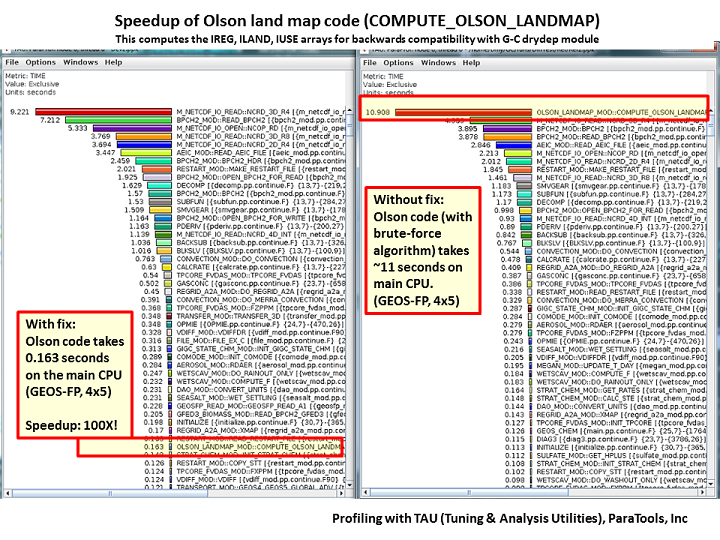 The figure shows wall clock time (in seconds) for each subroutine on the main thread (CPU 0) of a 1-day GEOS-Chem simulation with GEOS-FP meteorology at 4° x 5° horizontal resolution. Before the fix was implemented, routine COMPUTE_OLSON_LANDMAP took about 11 seconds on the main CPU. After the fix, the time spent in the routine was reduced to 0.163 seconds, thus eliminating a major bottleneck.

Outstanding issues that have not yet been resolved

We have discovered an issue with the Olson land map that occurs when compiling GCHP with the GNU Fortran compiler. The Olson land map values are apparently being returned from disk (via ExtData) as all zeroes. A full description of the issue may be found here: https://github.com/geoschem/gchp/issues/15