MERRA-2 is a reanalysis data product from NASA/GMAO. It is currently being produced with the GMAO/GEOS-5 Data Assimilation System Version 5.12.4. MERRA-2 is intended to replace the MERRA reanalysis product (which was created with GEOS-5.2.0). It has a native resolution of 0.5° lat x 0.625° lon x 72 hybrid sigma/pressure levels. MERRA-2 data is stored on the same vertical grid as the GEOS-5 "forward processing" (what we call GEOS-FP) and MERRA met field product.

NOTE: MERRA is currently being produced with the GMAO/GEOS-5 Data Assimilation system, version 5.12.4. This is a slightly different version of the GEOS/DAS than what is used to produce the GEOS-5 "forward processing" data. The description below mostly applies to MERRA-2 data, except that the native resolution of the archived MERRA-2 data files is now 0.5° x 0.625°.

The GEOS-5 ADAS is documented in Rienecker et al. (2008). More recent updates to the model are presented in Molod et al. (2011). The GEOS-5 system actively assimilates roughly 2 × 106 observations for each analysis, including about 7.5 × 105 AIRS radiance data. The input stream is roughly twice this volume, but because of the large volume, the data are thinned commensurate with the analysis grid to reduce the computational burden. Data are also rejected from the analysis through quality control procedures designed to detect, for example, the presence of cloud.

The assimilation is performed at a horizontal resolution of 0.3125-degree longitude by 0.25-degree latitude and at 72 levels, extending to 0.01 hPa. All products are generated at the native resolution of the horizontal grid. The majority of data products are time-averaged, but four instantaneous products are also available. Hourly data intervals are used for two-dimensional products, while 3-hourly intervals are used for three-dimensional products. These may be on the model’s native 72-layer vertical grid or at 42 pressure surfaces extending to 0.1 hPa.

Acknowledge the source of MERRA-2 data in your publications

If your GEOS-Chem research depends on the MERRA-2 meteorological data producs, please consider adding an acknowledgment to your citations, such as:

The MERRA-2 data used in this study/project have been provided by the Global Modeling and Assimilation Office (GMAO) at NASA Goddard Space Flight Center.

The following table credits the various individuals who have assisted with the development of the MERRA-2 met data product and its incorporation into GEOS-Chem:

This section describes the horizontal and vertical grids used by the GEOS-FP data products.

Fields are produced on the model’s native horizontal grid, with a resolution of 5/16 degree longitude by 1/4 degree latitude.

The GEOS5-FP global horizontal grid consists of IMn=1152 points in the longitudinal direction and JMn=721 points in the latitudinal direction. The horizontal native grid origin, associated with variables indexed (i=1, j=1) represents a grid point located at (180°W, 90°S). Latitude and longitude of grid points as a function of their indices (i, j) can be determined by:

Gridded products use four different vertical configurations: horizontal-only (can be vertical averages, single level, or surface values), pressure-level, model-level, or model-edge. Horizontal-only data for a given variable appear as 3-dimensional fields (x, y, time), while pressure-level, model-level, or model-edge data appear as 4-dimensional fields (x, y, z, time). In all cases the time dimension spans multiple files, as each file (granule) contains only one time. Pressure-level data is output on the LMp=42 pressure levels shown in Appendix B. The model layers used for GEOS-5 FP products are on a terrain-following hybrid sigma-p coordinate. Model-level data is output on the LM=72 layers shown in the second table of Appendix B. The model-edge products contain fields with LMe = LM + 1 levels representing the layer edges. The pressure at the model top is a fixed constant, PTOP=0.01 hPa. Pressures at model edges should be computed by summing the DELP(I,J,L) starting at PTOP. A representative pressure for the layer can then be obtained from these. In the GEOS-4 eta files, one could compute the pressure on the edges by using the “ak” and “bk” values and the surface pressure. In GEOS-5, the full 3-dimensional pressure variables are explicitly provided through (DELP(I,J,L)) and PTOP. Even though the model-level fields are on a hybrid sigma-p coordinate and their vertical location could be obtained from the “ak-bk” relationship, this may change in future GMAO systems. We thus recommend that users rely on the reported 3D pressure distribution, and not use ones computed from the “ak” and “bk”.

Note that the indexing for the GEOS-5 FP vertical coordinate system is top to bottom, i.e., layer 1 is the top layer of the atmosphere, while layer LM is adjacent to the earth’s surface. The same is true for edge variables, with level 1 being the top of the model’s atmosphere (PTOP), and level LM+1 being the surface.

The table below lists the combination of the horizontal and vertical grids onto which the GEOS-FP "raw" data products are placed:

The following description of the naming convention used for MERRA "raw" data files is paraphrased and adapted from Section 5.1 and 5.2 of the MERRA File Specification Document, pp 10ff:

The standard full name for the assimilated GEOS-5 MERRA-2 products will consist of five dot-delimited nodes:

The node fields, which vary from file to file, are defined as follows:


runid
For mainstream MERRA data, the following runid's are used:

collection
Collection names are of the form freq_dims_group_HV, where the four attributes are:

timestamp
This node defines the date and time associated with the data in the file. It has the form yyyymmdd

nc4
Denotes that the data is being saved in a netCDF-4 file.

This is an example of a MERRA-2 filename from the production segment of the original version of the fourth (most recent) assimilation stream. The data are time-averaged, two-dimensional, surface flux products, at native horizontal resolution. The file contains all data for 01 Jan 2015.

As required by the EOSDIS system, all GEOS-5 FP products are identified by a relatively short ESDT name. While GEOS-5 FP products are not currently distributed from the GES DISC, we have retained the ESDT designations for assimilation products. This name, also known as the ShortName, is a short handle for users to access and order data products. It takes the form: DFPTFHVGGG, where: where

NOTE: the ESDT name may not be correct. We are waiting for the MERRA-2 file spec to be released, and will correct the entries in the table below at that time.

This table shows only those MERRA-2 file collections that are required for GEOS-Chem.

As described above, the full file name for the GEOS-FP data products takes the form:

NOTE: MERRA-2 uses the identical time archiving as the GEOS-5 "forward processing" data product (i.e. what we refer to as GEOS-FP).

The MERRA-2 raw data are archived/averaged at the following times:

The processed MERRA-2 data for GEOS-Chem shall keep the same temporal resolution as the MERRA-2 raw data. To prevent file sizes from becoming larger than 2GB (i.e. the maximum netCDF-3 file size), we split the regridded MERRA-2 data among the following file types:

In the filenames abaove, the {RES} tag indicates the horizontal resolution of the file. Possible values are:

The A1 and A3 files use the following bins for time-averaging. The file timestamps in the data files indicate the center of the time-averaging bins.

NOTE: MERRA-2 uses the same timing scheme as the data marked in the plot as "GEOS-FP". (We will eventually update the image below.) 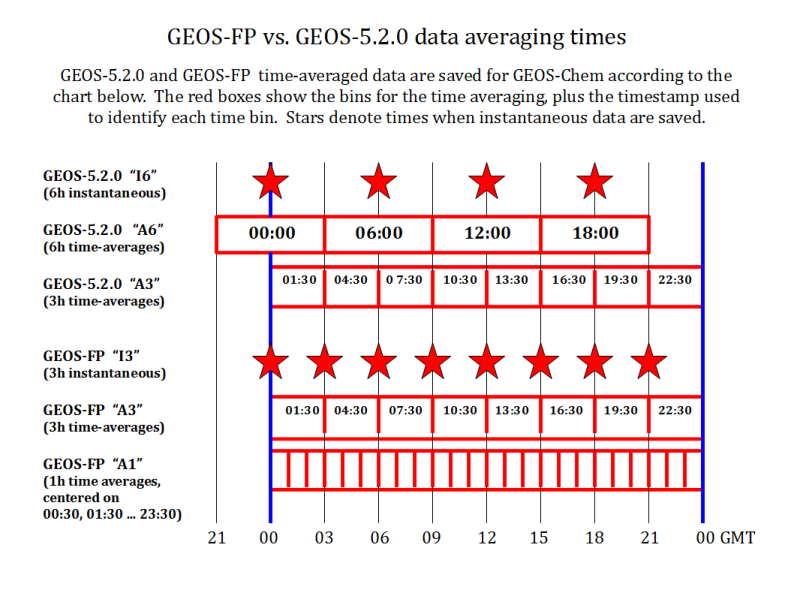 Please also see our List of MERRA-2 met fields wiki page for detailed information about which fields are stored in each of these file types.

Please see our MERRA-2 implementation details wiki page for more information about how we modified GEOS-Chem for use with the GEOS-FP met field product.