The ISORROPIA II package performs aerosol thermodynamical equilibrium. It partitions nitrate (HNO3 and NIT) and ammonia (NH3 and NH4) between the gas and aerosol phases. Inputs to the partitioning routine include temperature and RH. ISORROPIA II has significant benefits over previous implementations of ISORROPIA, especially for partitioning of nitrate at low RH.

ISORROPIA II [Fountoukis and Nenes, 2007] is implemented in GEOS-Chem to compute gas-aerosol equilibrium partitioning of nitric acid and ammonia. Particles in this study are not size-resolved; however, they can be generally assumed to represent PM2.5 since formation of sulfate-nitrate-ammonium on coarse mode sea salt and dust is excluded. Submicrometer-sized particles are likely to reach gas-aerosol equilibrium on time-scales less than the 1 hour computational time step used here [Meng and Seinfeld, 1996].

Sodium and chloride from accumulation mode sea salt are considered in the gas-aerosol equilibrium along with sulfate, nitrate, and ammonium. Calcium, magnesium, and potassium concentrations are not considered in the present study because of the issues with dust emissions previously mentioned. All inorganic aerosols are assumed to exist on the upper, metastable branch of the hygroscopic hysterisis curve. Although this assumption may not hold at higher altitudes in the free troposphere [Wang et al., 2008], since the focus of this study is mainly on surface-level concentrations, where humidities reach high values on a daily basis, the metastable assumption is acceptable.

ISORROPIA II has been implemented into GEOS-Chem v8-03-01 and later versions.

I’ve done some minor detective work at my end. Short version: the “noise” is likely the result of extremely non-linear behavior in certain areas of the parameter domain. This non-linear behavior is at least partially due to incomplete convergence of the solution rather than true non-linearity in the physical system. This analysis does not explore the implications of the finding for global aerosols, but my initial experiments suggest that this occurs at low sulfur concentrations and at all temperatures and humidities. Full explanation follows below.

I developed a stand-alone implementation of ISORROPIA to look at the partitioning behavior under conditions typical to the upper troposphere, where we seem to get the most noise. The plot below, which I call ISORROPIA Analysis, shows the results of parameter sweeps with ISORROPIA under the following conditions:

This is obviously a contrived set of experiments, but it shows what I suspect is the root of this problematic behavior. The sweep was performed in 4 environments:

The main takeaways are: 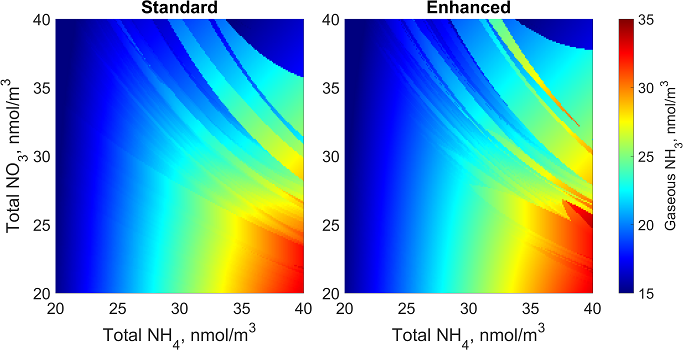 The left hand plot shows the results with standard convergence criteria (EPSACT = 0.05, NSWEEP = 4), compared to results for enhanced criteria (EPSACT = 10^-6, NSWEEP = 20) on the right. These plots are with ISORROPIA v2.0. As you can see, the solution becomes extremely non-linear in the (TNH3 > 30 and TNO3 > 30) region. The improved convergence criteria do not result in a smoother solution, just a different one. This plot shows that the sign of the change in gas-phase NH3 could flip depending on a small difference in background conditions.

Finally, the full extent of the issue is revealed by estimating the sensitivity of gas-phase NH3 with respect to total NO3 (ISORROPIA Sensitivity), calculated using a slice of the results from the ISORROPIA Analysis Single dataset. 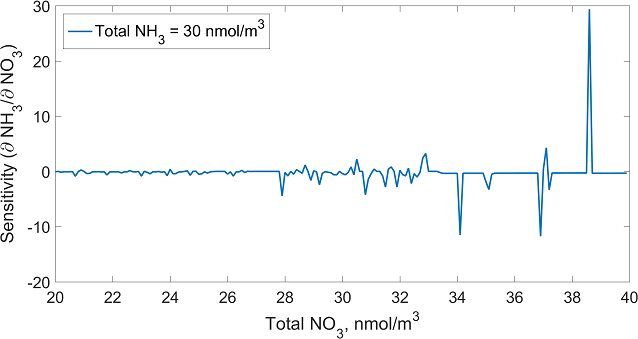 This shows the rate of change of the gas-phase NH3 concentration with respect to a change in total NO3, plotted as a function of this total. If two adjacent grid cells contain ~30 nmol/m3 of NO3 but initially differ in NO3 loading by 1 nmol/m3, they could have sensitivities of opposite sign.

A final note: editing the code to increase the accuracy of the root finding method can be done in other ways, including some of the v2.2 fixes and an increase in the initial number of subdivisions. Some combinations of these approaches were found to mitigate some of the nonlinearity in this region, but always with limited success. If these non-linearities are purely or largely the result of incomplete solution convergence, a dedicated investigation into enhancing or replacing certain core numerical methods in ISORROPIA may help.

See this section for more information about the ISORROPIA software updates.

In isoropiaII_mod.F (line 558) when calculate aerosol PH by isorropia, the value would be too high when we choose stable mode. After I checked the code, I think code should be changed as follows :

We have identified and fixed coding errors in ISORROPIA which significantly affect aerosol water pH calculations when the stable state for aerosol phase is applied. These errors exist in source codes for the cases G2 and O2, and also affect the pH results for the cases G1 and O1. The standard ISORROPIA codes fail to account for the partitioning of ammonia between the gas and aqueous phases. More information can be seen in our recent ACPD paper: https://www.atmos-chem-phys-discuss.net/acp-2018-6/.

should be replaced with

The same coding errors probably exist in all of the previous versions of GEOS-Chem because they exist in the versions from 1.5 to 2.1 of ISORROPIA. Below is an example showing the average aerosol pH by GEOS-Chem v10-01 during Jan 1st-Jan 15th, 2015 (left: standard model; right: revised model). A big difference can be found over some land areas such as USA, Europe, and East Asia, which is mainly because their relatively higher concentrations of ammonia. The marked value represents the pH of Beijing, which is reduced from about 7 (neutral) to about 4 (moderately acidic). Note that there is no influence when using metastable mode (the default).

Seb Eastham has repackaged the existing ISORROPIA v2.0 code as a Fortran module. This finally allows us to remove files ISOROPIA/isoropiaII_code.F and ISOROPIA/isrpia.inc, which have proven to be problematic for some newer compilers (e.g. GNU Fortran v5 and v6). He writes:

During the benchmarking process for GEOS-Chem v9-01-02, we discovered that ISORROPIA does not produce exactly the same output on single processor compared to multi-processor:

There is an unidentified OpenMP error which contributes to differences shown [in the v9-01-02a 1-month benchmark], as confirmed by independent tests of consecutive evaluations of a single executable compiled with and without parallelization. The impacts of this OpenMP error are typically less than a fraction of a percent, and negligible in terms of absolute value, with the exception of NIT and NH3. This is an issue to investigate further.

Here is a quick update on the issue in ISORROPIA.

Here the CHI* and PSI* are common-block variables and TINY is a small number (1d-20, but I used 1d-28 for testing). The CHI* and PSI* values are held threadprivate for the OpenMP parallelization. It looks as if there is some kind of roundoff error at the limit of precision that is creeping in here that could be caused by the optimization. For example, at grid box (37,21,11) every once and a while we get this roundoff error:

with similar roundoff errors (not shown here) happening in the computation of GNH3.

I don’t have a good sense of why precisely this is occurring, other than to say that ISORROPIA uses a lot of internal common blocks and other obsolete coding practices. The ISORROPIA code is extremely confusing to follow. My guess is that either something is not being held private for the parallelization, or that variables in common blocks are not being initialized properly.

Please see this attached report that documents my replication of the issue with both the GEOS-Chem and ANISORROPIA versions of ISORROPIA II in a box model....I would propose adding a flag (-fp-model source) for the compilation of ISORROPIA only. Add this to the file ISOROPIA/Makefile as follows:

The -fp-source option of the Intel Fortran Compiler tells the compiler to only do "safe" optimizations (i.e. nothing that would affect the numerical precision of the output). For some reason, ISORROPIA II is very sensitive to the compiler optimization.

Bob Yantosca has done some additional 3-day test runs to assess the impact of using the -fp-model source option. The results are:

All of the output files from runs 1-8 were 100% binary identical to each other. Therefore, using -fp-model source seems to eliminate the random numerical noise generated by ISORROPIA.

Update 8/26/11: In GEOS-Chem v9-01-02 we shall apply the -fp-model source option to all source code files, not just ISORROPIA. This will help us to ensure the precision of the results as we make widespread changes for ESMF compatibility.

Update 9/1/11: Oops, this may not be solved after all. Runs longer than 3 days still manifest the problem. See this PDF presentation for more details.

There are 2 minor bug fixes for ISORROPIA II. There are two locations in file ISOROPIA/isorropiaIIcode.f where the variable MOLALR(4) should be MOLALR(9). These fixes affect how aerosol phase water is calculated. Since GEOS-Chem typically considers sodium and chloride, these subcases are likely not being used, but the code should be updated in case these subcases are used in the future.

The following issues in ISORROPIA II have now been fixed as of August 2010:

ISORROPIA is not recommended outside of a pretty narrow temperature and pressure range. There’s an optional flag in isorropiaII_mod.F called skip_if_p_and_t_are_out_of_range, which prevents ISORROPIA from running in grid boxes where P < 200 hPa or T < 250 K. This may not be relevant for your simulations, but it can help to reduce noise at higher altitudes. You could try enabling that (uncomment the line define SKIP_IF_P… in isorropiaII_mod.F, around line 108) and see if it helps. This should allow more reliable changes at lower altitude to propagate to higher altitude in a smoother fashion.

For those of you who are running one of the GEOS-Chem nested grid simulations, you may encounter a segmentation fault error. This error is caused by GEOS-Chem running up against the memory limits of the machine. One way to solve this problem is to compile ISORROPIA II for single processor only:

I tracked down the memory bottlenecks in my [China nested-grid simulation]....The crashes then were caused by memory allocation in ISORROPIA (with all of the private variables that had to be copied), so after turning off the parallelization for the ISORROPIA driver routine, I can actually spin up the model!

To compile ISORROPIA II for single processor, while compiling everything else for multi-processor, you can add an extra comment character ! to the !$OMP commands in GeosCore/isoropiaII_mod.f, such as:

This issue is somewhat resolved.

At the GEOS-Chem User's meeting (2009) Becky Alexander and her student Eric noted that ISORROPIA II sometimes returns a negative H+ concentration. In my tests, the negative values occurred in N. India and Western Russia area during limited times of the year. A quick fix has been implemented. A condition I tracked down was returning a negative [H+] when solving the HSO4 = H + SO4 equilibrium (CALCHS4 in isorropiaIIcode.f) when the actual answer should have been ~1e-27 mol/m3. (I plugged the same input values into a spreadsheet and it returned the same negative answer so it seems like a numerical precision issue.) For my case study, it came down to subtracting two numbers of very similar value (first 8 digits the same) which resulted in a negative. I put in a fix to reset H+ to 1d-30 in CALCHS4 if it goes negative.