Here is a description of the GEOS-Chem dry deposition scheme from several journal articles:

Dry deposition velocities for sea-salt aerosols (and sulfate formed in sea-salt aerosols) are computed with the size-dependent scheme of Zhang et al. [2001] integrated over each model size bin and accounting for hygroscopic growth as a function of relative humidity [Gerber, 1985]. Dry deposition velocities for all other species are computed with a standard resistance-in-series scheme based on Wesely [1989] as described by Wang et al. [1998].

Dry deposition of oxidants and water soluble species is computed using a resistance-in-series model based on the original formulation of Wesely [1989] with a number of modifications [Wang et al 1998]. The dry deposition velocities are calculated locally using GEOS data for surface values of momentum and sensible heat fluxes, temperature, and solar radiation.

where Ra is the aerodynamic resistance to transfer to the surface, Rb,i is the boundary resistance, and Rc,i is the canopy surface resistance. Ra and Rb,i are calculated from the GCM meteorological variables [Jacob et al 1993]. Surface resistances Rc,i are based largely on the canopy model of Wesely [1989] with some improvements, including explicit dependence of canopy stomatal resistances on LAI [Gao and Wesely, 1995] and on direct and diffuse PAR within the canopy [Baldocchi et al, 1987]. The same radiative transfer model for direct and diffuse PAR in the canopy is used as in the formulation of isoprene emissions. Surface resistances for deposition to tropical rain forest and tundra are taken from Jacob and Wofsy [1990] and Jacob et al [1992], respectively. The surface resistance for deposition of NO2 is taken to be the same as that of ozone [Erisman & Pul, 1994; Kramm et al, 1995; Eugster and Hesterberg, 1996] and hence lower than specified by Wesely [1989]. Dry deposition of CO and hydrocarbons is negligibly small and not included in the model [Mueller and Brasseur, 1995].

Havala Pye reexamined the code, and she found that there are three routines basically using the Zhang et al.(2001) scheme:

The source code of the various routines are located in drydep_mod.f.

For more information about the input data files required by the drydep scheme, please see the README file: GEOS_1x1/drydep_200203/README

In GEOS-Chem v10-01 and higher versions

NOTE: This update was made to facilitate the implementation of both the HEMCO emissions component and FlexChem chemical solver.

In GEOS-Chem v10-01 and higher versions, the following changes were made to how dry deposition is applied:

Here we list some of the various input values used by the dry deposition routines. Full citations may be found in the references section below.

The land cover input variables for the GEOS-Chem dry deposition module are listed in the table below:

The aerodynamic resistances (IRI, IRLU, IRAC, IRGSS, IRGSO, IRCLS, IRCLO) and maximum deposition velocity for aerosol (IVSMAX) for each of the 11 dry deposition land types are read from this file:

and have the following values:

In GEOS-Chem v11-01 and higher versions, these parameters are now defined in the GEOS-Chem species database, and are then copied into the local dry deposition arrays in routine INIT_DRYDEP.

Now dry dep is set up as:

Notes: To run with non-local mixing, you don't need to modify globchem.dat with " MVK=DRYDEP+DRYMVK", because drydep here is done out of chemistry step. But you need to modify that for full mixing scheme, which is using chemical solver to calculate drydep.

The reference for these updates is

Anthony Wong and Amos Tai have developed code to apply CO2 effect on stomatal conductance according to Franks et a. (2013) equation. This feature is implemented as an option in the Deposition Menu of input.geos and is off by default:

This update was validated in the 1-month benchmark simulation GEOS-Chem v10-01a and approved on 05 Feb 2014.

It was discovered that ozone in the eastern US in GEOS-Chem v9-02 was too high when using the Olson 2001 land map. Patrick Kim implemented the following updates to correct this issue:

1. Force the use of MODIS LAI from 2008 if the last year is beyond 2008. There is a large difference in the 2009 file that still needs to be investigated.

A number of structural updates were made to the dry deposition routines in order to remove bottlenecks that would have prevented grid-independent functionality. These include:

The only difference comes from the pressure value (PRESS variable) used in the dry deposition code to calculate the diffusivity of a molecule in air. Pressure comes into play in the mean free path calculation in DIFFG. For some reason the pressure was set at a constant value of 1500hPa (I do not know why this value was chosen in the first place, any ideas?). When I was going over the dry deposition code for sea salt I had replaced this fixed value with local sea level pressure (SLP). I think that it makes sense to use the actual local pressure instead of this fixed value. The overall effect is small.

This update was validated with 1-month benchmark simulation v9-02d and approved on 19 Dec 2012.

As described in this wiki post, we have removed the module file Headers/CMN_DEP_mod.F from GEOS-Chem. The dry deposition arrays that were contained in this module are now carried by the the Meteorology State object (aka State_Met).

Application of dry deposition with mixing_mod.F90

This discussion has been moved to a section above.

In module GeosCore/drydep_mod.F, I discovered a bug in the subroutine DEPVEL. For the calculation of aerodynamic resistance RA under very stable atmospheric conditions (line 1811), the integration of the stability function phi_h (aka dimensionless vertical temperature gradient) from the roughness length to grid box center doesn't take into account the discontinuity occurring at z/L = 1 where phi_h switches from 1 + 5(z/L) to 5 + z/L (Holtslag, 1993). The result is too high of a value for the integral of phi_h and subsequently RA.

A straightforward solution is to calculate RA under stable conditions (L>0) using an integral form of the stability function, such as equation (12) of Holtslag, 1988. I implemented these changes in drydep_mod.F (from GCv 10-01, public release). To see the effect of the bug, namely a discontinuity in RA, refer to Figure 1, which plots RA as a function of stability (1/L). 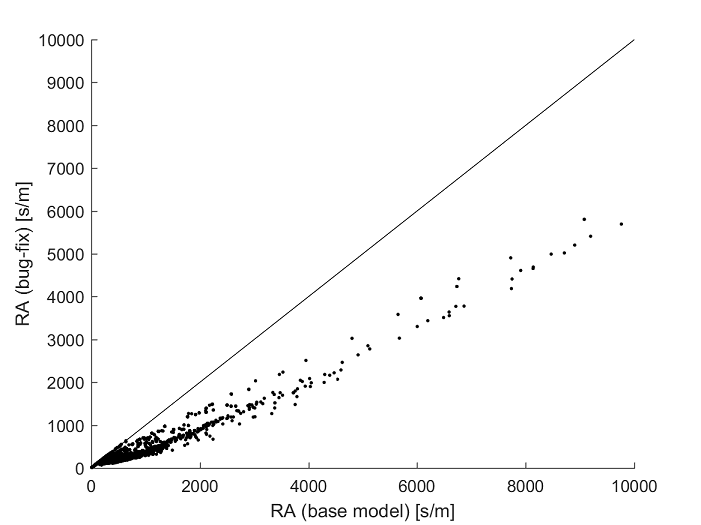 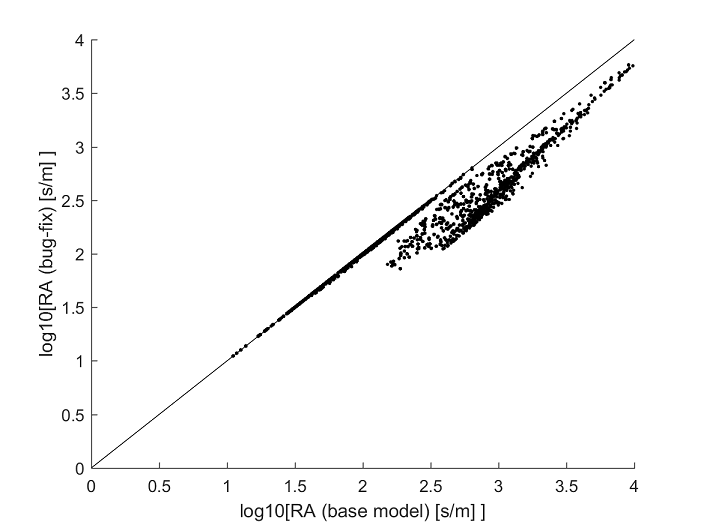 This issue has been resolved in the new soil NOx algorithm that was added to GEOS-Chem v9-02. The new module GeosCore/canopy_nox_mod.F computes the NOx from the canopy independently of the dry deposition module. We shall leave this post here for reference.

In GEOS-Chem there is a code dependency between the dry deposition routines soil NOx emissions routines. This is purely historical baggage that goes back to the days of the old 9-layer Harvard-GISS CTM (from which these routines were taken).

The dry deposition routine DEPVEL (in drydep_mod.f) computes a quantity called CANOPYNOX, which is the bulk surface resistance of the canopy to NOx deposition. This is computed in the following lines of code:

However, the CANOPYNOX variable is not defined within drydep_mod.f, but is found instead within the soil NOx emissions code header file commsoil.h:

and is then also used within the soil NOx emissions function SOILCRF, as follows:

This is not necessarily a problem as long as dry deposition is always turned on whenever you are doing a full-chemistry simulation that requires soil NOx emissions. In the driver routine main.f, dry deposition is always done before emissions. However, this is bad coding style and a potential source of error. (This also must be corrected for the GEOS-Chem column code, in which all inputs must come thru the argument list.)

In the new soil NOx emissions code being developed by Rynda Hudman (much of which is based on the GEOS-Chem column code being developed by Bob Yantosca and Philippe Le Sager), there is a new module called canopy_nox_mod.f. This module computes the CANOPYNOX quantity independently of routine DEPVEL in drydep_mod.f, which allows for a totally clean separation between dry deposition routines and emissions routines.

At present, the new canopy_nox_mod.f is not available in the standard mainline GEOS-Chem code. It is slated to be incorporated with the soil NOx emissions update.

We have explicitly added variable IW to the !$OMP+PRIVATE list in routine DEPVEL in GeosCore/drydep_mod.F. This should already be held private because it is a loop index, but it doesn't hurt to add it to the list.

We also have added ZO as a PRIVATE variable when compiling with GCAP meteorology.

This update was tested in the 1-month benchmark simulation v9-02r and approved on 14 Nov 2013. This update is included in Adjoint v35j.

We discovered a minor bug in the parallel DO loop of routine METERO (in module GeosCore/drydep_mod.F):

The SP variable (which is surface pressure) had not been held PRIVATE in the above parallel loop. This caused slightly different surface pressure values to be saved into the PRESSU array. Later on in the code, PRESSU is passed as an argument to function DIFFG, which computes the computes the molecular diffusivity of each drydep species. This in turn affects the value of the drydep velocity of each species. Therefore, as a result of this error, we would observe small numerical differences in the results of GEOS-Chem simulations when using OpenMP parallelization versus when OpenMP parallelization was turned off.

The fix is to add SP to the PRIVATE list:

which then ensures that we obtain identical results whether or not OpenMP parallelization is turned on.

In dry deposition, we still have a dry dep option for ISN2. ISN2 was the nighttime isoprene nitrate in old versions of the chemistry, and ISN1 was the second generation product from this species. But now, we call ISN1 the isoprene nitrate species. So, we should replace IDTISN2 in dry dep and tracerid_mod with IDTISN1. That fix is also in the above directory.

In GeosCore/drydep_mod.F, we replaced these lines of code:

and in GeosCore/tracerid_mod.F, we replaced these lines of code:

Fix for NO3 + ISOP product

The nitrate isoprene nitrate is now called ISN1. It must be added to GEOS-Chem as a transported tracer to undergo dry deposition. We can use the molecular weight given to other isoprene nitrates of 147 g/mol. In addition, the references to ISN2 in drydep_mod.F and planeflight_mod.F (where the ANs are added up) should be changed to ISN1.

NOTE: We will add this fix after FlexChem is integrated into GEOS-Chem. Because FlexChem will completly remove SMVGEAR from GEOS-Chem, we shall add this fix into the KPP master equation file (instead of the SMVGEAR globchem.dat file).

None that we are aware of at this time.