This page describes the cloud convection (aka wet convection) algorithms of GEOS-Chem. We also invite you to read our Wet deposition wiki page, which contains information about the algorithms used for scavenging of soluble tracers.

A major difference between the GEOS-3, GEOS-4, and GISS models is the treatment of wet convection. GEOS-3 [and now also GEOS-5, ed.] uses the Relaxed Arakawa-Schubert convection scheme [Moorthi and Suarez, 1992]. GEOS-4 has separate treatments of deep and shallow convection following the schemes developed by Zhang and McFarlane [1995] and Hack [1994]. The convection scheme in the GISS GCM was described by Del Genio and Yao [1993]. Unlike the GEOS models, the GISS GCM allows for condensed water in the atmosphere (i.e., condensed water is not immediately precipitated), resulting in frequent nonprecipitating shallow convection. In the wet deposition scheme, we do not scavenge soluble species from shallow convective updrafts at altitudes lower than 700 hPa in the GISS-driven model, whereas we do in the GEOS-driven model [Liu et al., 2001].

Updraft scavenging of soluble tracers (as applied to both the Relaxed Arakawa and Hack/Zhang-McFarlane schemes in GEOS-Chem) is described in Section 1 of Jacob et al [2000] and in Section 2.3.1 of Liu et al [2001].

This is the convection scheme that GEOS-Chem currently uses with GEOS-FP and MERRA-2 meteorology. The source code for this scheme is located in routine DO_CONVECTION in GeosCore/convection_mod.F.

After the v11-01 public release was issued, the GCST discovered a computational bottleneck in the convection module. The following DO loop at line 343 of GeosCore/convection_mod.F was not parallelized:

The loop was probably left unparallelized due to an former issue that has probably since been resolved.

Bob Yantosca profiled the GEOS-Chem v11-01-public code with the TAU performance analyzer, using a 2-model-day simulation with 8 CPUs. The results are shown below: 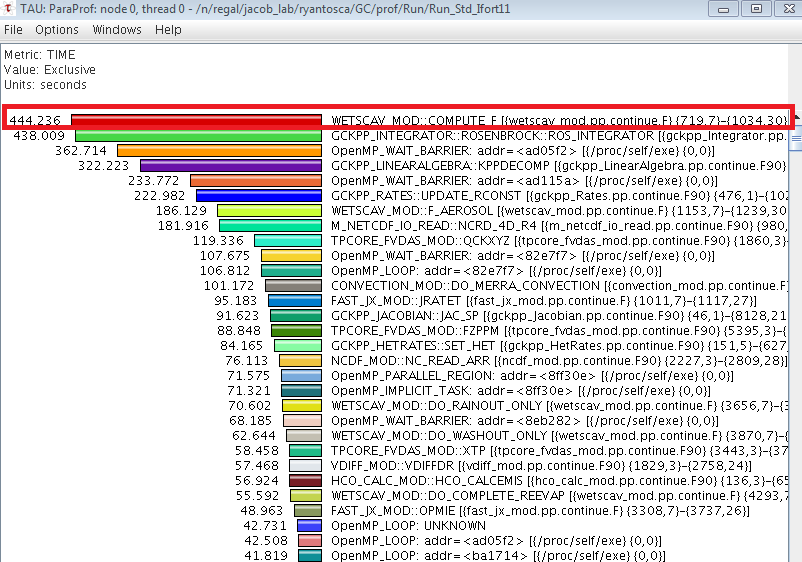 As you can see, because the COMPUTE_F routine was not being called from a parallel loop, the subroutine was only being executed on the master CPU. This caused a slowdown because the other CPUs were being forced to wait until COMPUTE_F finished before the simulation could proceed.

The solution was to parallelize the DO loop, in order to obtain a better load balancing. We added the code in GREEN: 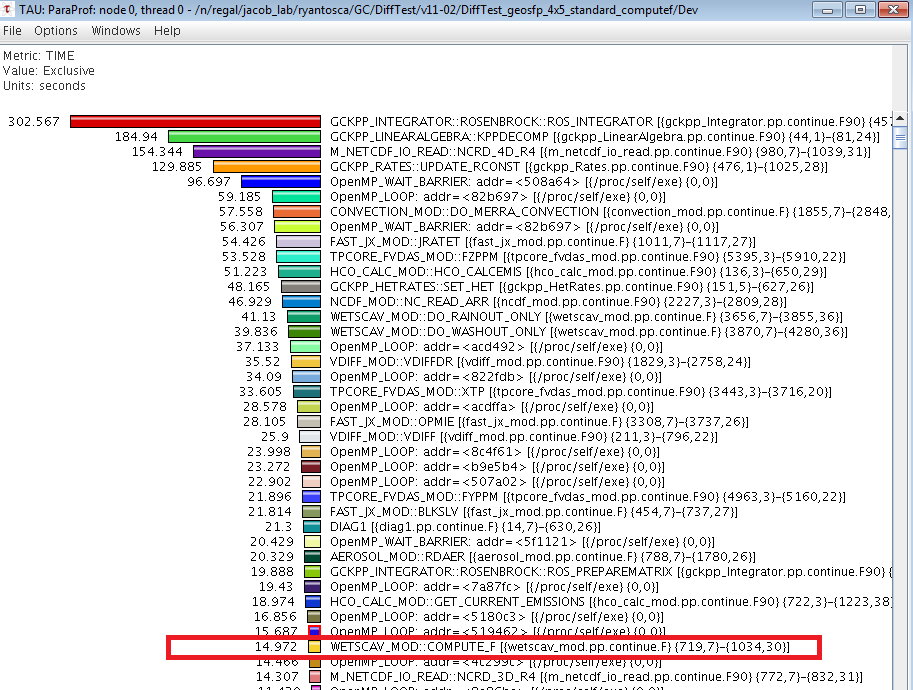 After parallelizing the loop, the COMPUTE_F routine now only spends 14 seconds on the master CPU, instead of ~400 seconds. This means that the work of calling COMPUTE_F is now being efficiently split up among all 8 CPUs. This should result in a significant speedup.

The GCST will add this fix as a patch to the v11-01 public release, as well as into the v11-02a development stream. We have performed some timing tests that show the impact of this speedup (as well as the speedup caused by the improved P/L diagnostic in KPP that will go also into v11-02a).

I am running v10.01, nested-grid NA full-chemistry w/ SOA simulation with the GEOS-FP met fields, and have found instances of extremely high concentrations of certain tracers that develop all of a sudden. I traced this back to a bug (highlighted in RED) in the DO_MERRA_CONVECTION (in module GeosCore/convection_mod.F) routine at the following:

Here, the value of ALPHA, which should be less than or equal to 1, is sometimes much higher than 1, and for the attached example was >10^5. Since ALPHA is used to calculate resuspension of precipitating mass from above, these high values of ALPHA lead to a gain in tracer mass at the lower levels in excess of what is coming from above. I suggest we replace the RED code with the following piece of code in GREEN which is used elsewhere in the DO_MERRA_CONVECTION routine.

A second bug I noticed is in the lines in RED right below the first one. The current code is as follows:

In this case, the amount of tracer GAINED is (mistakenly) not added to Q before WETLOSS is calculated. The fix for the bold faced line should be as follows:

These updates were validated in the 1-month benchmark simulation v11-01a, which was approved on 07 Jul 2015.

Mass conservation tests validating the change in tracer units within cloud convection revealed a discrepancy in mass conservation between using GEOS-5 and GEOS-FP. Comparison of subroutine DO_MERRA_CONVECTION, the convection routine used for GEOS-FP, and subroutine NFCLDMX, the convection routine used for GEOS-5, showed that a calculation in DO_MERRA_CONVECTION was incorrectly outside of the internal timestep loop.

In DO_MERRA_CONVECTION, the quantity QB, the average mixing ratio in the column below the cloud base, is calculated in two steps:

To correct this problem, we made these modifications in subroutine DO_MERRA_CONVECTION, located in module GeosCore/convection_mod.F:

With these updates, the mass variance for GEOS-FP within convection is the same order of magnitude as for GEOS-5. For the case of CO2 with emissions turned off and initial values of 370 ppm globally, the mass fluctuation is a few hundred kg globally over a few days.

Using the Tuning and Analysis Utilities (TAU), we were able to make the following modifications to routine DO_CONVECTION (in module file GeosCore/convection_mod.F) that resulted in a speedup in the GEOS-FP/MERRA convection module. We made modifications in the following routines: 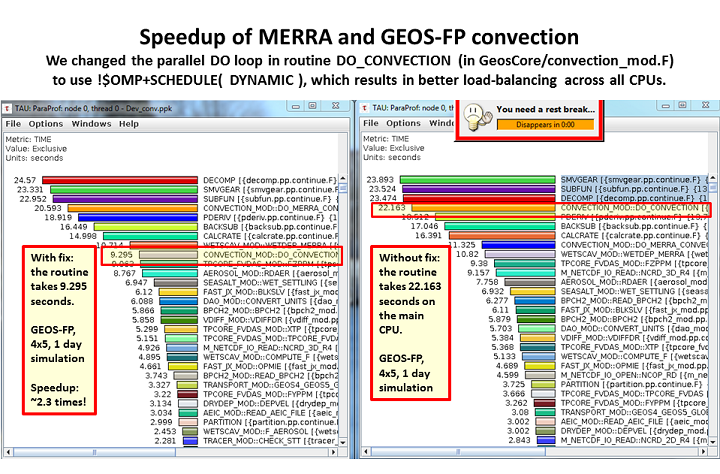 Also note that with this fix, the total CPU time of this run (1-day with GEOS-4x5 met) dropped from 16:l1 to 15:23 (min:sec). So this fix is making the overall simulation run a little faster for each simulation day.

The GEOS-Chem Unit Tester revealed the presence of array temporaries in the call to GEOS-4 convection routine FVDAS_CONVECT. To remove the array temporaries, we made these modifications in subroutine DO_GEOS4_CONVECT, located in module GeosCore/convection_mod.F:

(1) Declare the F variable with the TARGET attribute, as follows:

The bug is in routine DO_MERRA_CONVECTION. When DIAG38 is first written (around line 2056 in my code, after the comment titled "(3.4) ND38 Diagnostic"), DIAG38 is formed by adding T0 (converted to appropriate units) to the diagnostic each level K. This is correct. However, the second time we add to DIAG38 (below the cloud base, around line 2245 in my code), we add T0_SUM to each level. From what we can tell, T0_SUM represents not the washout from each level but instead the total wet scavenging loss, summed over the entire column. So we are effectively double counting in these levels and adding way too much. [Helen Amos and I] think this should instead be adding WETLOSS.

The fix is below:

Routine DO_MERRA_CONVECTION was using tracer flags IDTHg2 and IDTHgP to determine whether routines ADD_Hg2_WD, ADD_HgP_WD, and ADD_Hg2_SNOWPACK should be called. However, IDTHg2 and IDTHgP aren't ever defined and were set to zero, so these routines were never called even when the correct mercury species were used.

The fix is to replace these two lines of code

Outstanding issues that are not yet resolved