On this page we provide information about the TPCORE advection schemes that have been implemented into GEOS-Chem.

There are a couple of different versions of TPCORE currently implemented into GEOS-Chem.

TPCORE replaced with version based on GMI model

NOTE: The GMI version of TPCORE was implemented into GEOS-Chem v8-01-03.

Dylan Jones and Hongyu Liu both independently found that the existing TPCORE transport code used to perform the advection for GEOS-4 and GEOS-5 meteorology (tpcore_fvdas_mod.f90, by S-J Lin and Kevin Yeh) causes an overshooting in the polar stratopsheric regions. Claire Carouge has supplied a fix for this issue.

It seems that GMI does not have this problem. You might want to compare the plots on Pages 7 & 10 of this PDF file.

Attached are the PowerPoint slides. We added slide 9 which compares the mixed layer depth for GEOS-Chem (with GEOS-5) and GMI (with GEOS-4); we see the same problem in GEOS-Chem with GEOS-5, but we do not see it in GMI.

I think I finally got tpcore to work. You have some plots attached for Radon. So far, I ran 5 months of simulation and each month looks much better: no polar spike and much much lower stratospheric tracer. The concentration of Radon is never null in the stratosphere but I don't think it is in GMI neither, I think the range on the plot was cut off. So I did the plot with the same cut off. Let me know if you see something strange I haven't seen.

I don't know for sure what was the problem but I think it was a problem with the definition of the polar cap. In GEOS-Chem, we only averaged values for cells at the poles on 1 band of latitude. In GMI, they use what they call an enlarged polar cap and thus they average values at the poles on 2 bands of latitude.

But, the tpcore in GEOS-Chem and GMI are not easy to compare. I'm not sure there was not a difference in the transport itself and I can't be totally sure the pressure fixer was well introduced in tpcore. I have some doubts about this.

Attached are some comparisons of the CO/O3 correlations in the UTLS with the new tpcore.

The files called *.gmi_geos.png are with the old version of tpcore and those called *.gmi_geos4_tpcore are with the corrected tpcore. As you can see, there is much less scatter in the correlations, which suggest less anomalous mixing with the new code. The scatter is more similar to what we see in GMI. There is still an offset in the stratosphere (for high ozone in the plots), but I think this may be due to linoz rather than to the transport scheme. This is a huge improvement for GEOS-Chem. Thanks very much for fixing it.

Thanks Claire! Well done. It's clear that the polar overshooting problem is now fixed.

Also see this PDF document for more information about the new TPCORE version as installed in GEOS-Chem v8-01-03.

We used the Tuning and Analysis Utilities (TAU) to diagnose a performance bottleneck when routine FZPPM is called from routine TPCORE_FVDAS. Both of these routines are located in module file GeosCore/tpcore_fvdas_mod.F.

Recall that in routine TPCORE_FVDAS, we use a pointer variable (ptr_Q) to pass a 3-dimensional data slice of the 4-dimensional Q array to routine FZPPM, as shown here:

However, the dummy argument qq1 in routine FZPPM, which receives the 3-d data slice from TPCORE_FVDAS, had been declared with explicit dimension bounds:

Long story short: as described on our Passing array arguments efficiently in GEOS-Chem wiki page, passing a pointer variable (such as ptr_Q) to a subroutine via a dummy argument that has explicit dimension bounds (such as qq1) is VERY INEFFICIENT, and can cause a significant slowdown.

To remove this performance bottleneck, we simply had to rewrite the declaration of argument qq1 in the FZPPM routine as follows:

Making this fix significantly reduces the amount of time it takes to pass the spent in the routine TPCORE_FVDAS, as shown in the following plot. 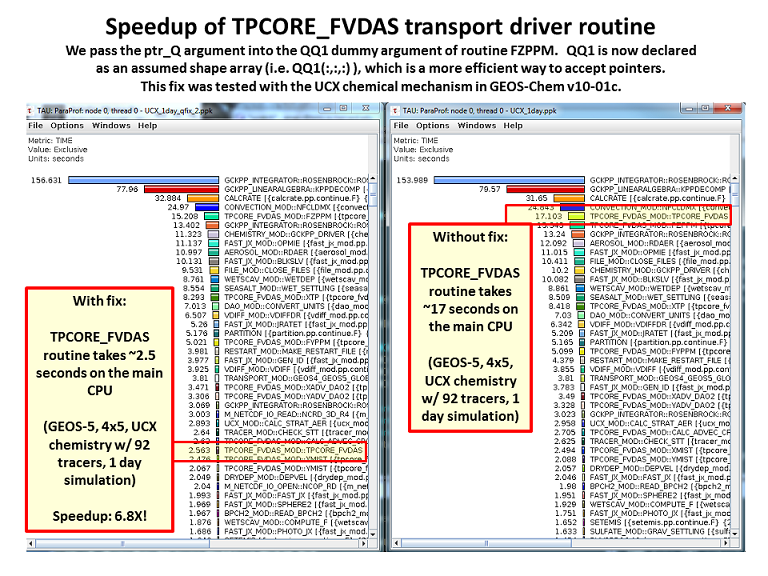 NOTE: The following modifications were added to GEOS-Chem v9-02k, which was approved on 07 Jun 2013.

In GEOS-Chem v9-02, we have rewritten sevaral subroutine calls in order to more efficiently pass data to the TPCORE routines. Please see these wiki posts for detailed information: