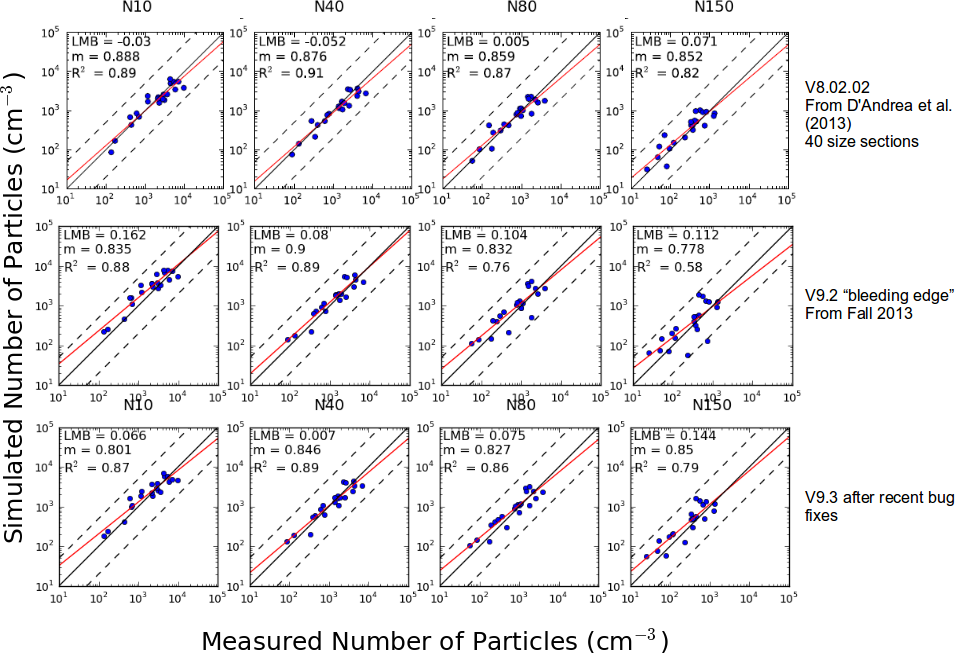 NOTE: As described below, there appears to be a potential parallelizaiton problem with the TOMAS ND60 diagnostic. We are currently looking into this. This issue, however, does not affect the tracer concentrations computed by TOMAS, but only the output of the ND60 diagnostic itself. For this reason we decided not to delay the GEOS-Chem v9-02 public release process. TOMAS benchmarks for v9-02 are currently being evaluated.

We have found and fixed several minor numerical and coding issues prior to the public release of GEOS-Chem v9-02 (03 Mar 2014). The TOMAS40 simulation has been validated with the GEOS-Chem Unit Tester. Below is the output of a unit test that was submitted on 2014/02/21 at 12:47:26 PM:

In the subsections below, we describe in more detail the fixes that we made for GEOS-Chem v9-02:

We now read many of the TOMAS data files from the directory TRIM( DATA_DIR_1x1 ) // 'TOMAS_201402/'. This avoids us from having to keep these big files (some of which approach 100 MB in size) in individual users' run directories.

Prevent sea salt from being emitted over ice in TOMAS

The FOCEAN (fraction of box that is ocean parameter) in TOMAS seasalt emissions didn't consider ice. I've modified it to do things more like the bulk emissions. In GeosCore/seasalt_mod.F, at line 1954, there is a line...

I couldn't figure out a way for FOCEAN to take into account the fraction that is land and fraction that is ice, so I will just use the IS_WATER to filter out boxes that are mostly ice. The box scheme is actually simpler and emits into the full box (or not) depending on the logical variable returned by function IS_WATER.