This page describes the various ship emissions inventories that have been implemented in GEOS-Chem.

NOTE: In GEOS-Chem v10-01 and higher versions, all ship emissions (including the PARANOX plume model) are handled by the HEMCO emissions component.

At present there are several different ship emissions options in GEOS-Chem. All of these are available for use via the HEMCO emissions component.

ARCTAS is now superseded by CEDS in GEOS-Chem 12.1.0 and later versions.

The ARCTAS pre-mission inventory of SO2 was first introduced in GEOS-Chem v8-01-04.

If you want to reference the work on publication or website, you may either mention Diehl et al. [manuscript in preparation, 2009] or refer to the AeroCom readme document (prepared by Diehl).

Corbett is now superseded by CEDS in GEOS-Chem 12.1.0 and later versions.

ICOADS is now superseded by CEDS in GEOS-Chem 12.1.0 and later versions.

The ICOADS ship inventory was first introduced in GEOS-Chem v8-02-03. It contains the species NOx, CO, and SO2. Chulkyu Lee worked on implementing ICOADS into GEOS-Chem.

Ship activity patterns depicted by the International Comprehensive Ocean−Atmosphere Data Set (ICOADS), the Automated Mutual-Assistance Vessel Rescue System (AMVER) data set, and their combination demonstrate different spatial and statistical sampling biases. These differences could significantly affect the accuracy of ship emissions inventories and atmospheric modeling. We demonstrate (using ICOADS) a method to improve global-proxy representativeness by trimming over-reporting vessels that mitigates sampling bias, augment the sample data set, and account for ship heterogeneity. Apparent under-reporting to ICOADS and AMVER by ships near coastlines, perhaps engaged in coastwise (short sea) shipping especially in Europe, indicates that bottom-up regional inventories may be more representative locally. Primarily due to the long time series available publicly for ICOADS data, the improved ICOADS data set may be the most appropriate global ship traffic proxy identified to date to be used for a top-down approach. More generally, these three spatial proxies can be used together to perform uncertainty analyses of ship air-emissions impacts on a global scale (http://coast.cms.udel.edu/GlobalShipEmissions/).

An updated version of PARANOX was brought into GEOS-Chem v10-01 via the HEMCO emissions component.

This post describes the original updates to PARANOX made by Chris Holmes and Geert Vinken in July 2014. These updates have since been brought into GEOS-Chem as an extension to the HEMCO emissions component.

Geert and I have updated the ship plume emissions in GEOS-Chem. A paper based on the updated model is now accepted in ACP (see this link).
The updated features are as follows:

As with previous versions, PARANOX uses a look-up table derived from a Gaussian plume model to provide effective emission factors for NOx, O3, and HNO3 from ships. Both the Gaussian plume model and GEOS-Chem with the embedded look-up tables have been evaluated against observations (Holmes et al. 2014; Vinken et al., 2011). The emission factors are based on 8 environmental variables from the CTM: ambient concentrations of NOx and O3, solar zenith angle at emission time and 5 hours later, photolysis rates of NO2 and O3, temperature, and wind speed.

Re-implementation as a HEMCO extension

Christoph Keller and the GEOS-Chem Support Team have re-implemented the updated implementation of PARANOX described above as a HEMCO extension. A new HEMCO extension module (HEMCO/Extensions/hcox_paranox_mod.F90) has now replaced the original paranox_mod.F module.

New PARANOX lookup table files have been created in both COARDS-compliant netCDF format as well as in text format for use with HEMCO. These new data files are contained in the HEMCO data directory tree. For detailed instructions on how to download these data files to your disk server, please see our Downloading the HEMCO data directories wiki post.

The PARANOX updates described above were validated in GEOS-Chem v10-01h. The following discussion ensued.

I sent in the updates to ship NOx chemistry (aka PARANOX). In the v10-01h benchmark plots I see that surface O3 concentrations in the North Pacific Ocean have decreased 20 ppb and concentrations are now 10 ppb or lower. The spatial pattern is consistent with ship emissions causing the change, but the magnitude is much larger than I expected based on the changes that I made. In my tests with v9-02, my updates to ship NOx chemistry change O3 by only 2 ppb.

Are there other model changes that could have affected MBL chemistry? Did the underlying inventory of ship emissions change?

Thanks for looking into this. Do you think that PARANOX now destroys more O3, or produces more?
In anticipation of FlexChem, the implementation of dry deposition has changed in v10-01h compared to previous versions: All dry deposition calculations are now done as part of turbulence (in the non-local PBL scheme, or before applying the full PBL mixing if this option is selected). Also, all dry deposition frequencies are now calculated over the same deposition height (level 1 for non-local PBL, entire PBL for full mixing scheme).
In other words, the PARANOX loss rates for O3 (and HNO3) are now calculated based on surface concentrations, and then applied immediately afterwards in the non-local PBL scheme. In your implementation in v9-02, the PARANOX dry deposition rates were calculated (and applied) over the entire PBL height, and then applied in chemistry (e.g. passed to the chemical solver via calcrate.F). The new version now also includes HNO3 deposition from PARANOX.

Do you think these changes may explain the differences? And is there anything that should be changed?

ARCTAS has a base year of 2008, but the implicit AnnualScalar base year is 2000. So scaling from 2008 to another year would require normalizing the AnnualScalar to the base year. Instead of a ScaleID of just 11, it would be 11/19. In the HEMCO_Config.rc files for full-chemistry and aerosol-only simulations, we have this entry:

So it is proposed to change this to:

This update only introduces very small changes into the 1-month benchmark results:

This update was validated with the 1-month benchmark simulation v10-01h and approved on Approved 01 May 2015.

I am experiencing an issue with the O3 dry deposition fields in V9-2 (GEOS-FP), and note a similar issue has been previously reported within the wiki with a response from Bob Yantosca.

The O3 deposition fields are extremely high over Shanghai, northern Europe and near Lake Superior. A log plot of this is attached below. Masking for anomalous values, yields a annual deposition within expected bounds (821 Tg / yr). This anomaly is not present for other depositional fields tested (e.g. SO2, iodine tracers, etc). The issue is present within the “off-the-shelf” version i have of v9-2. Standard compile settings have been used, the flags implicated in response on the wiki were not used. 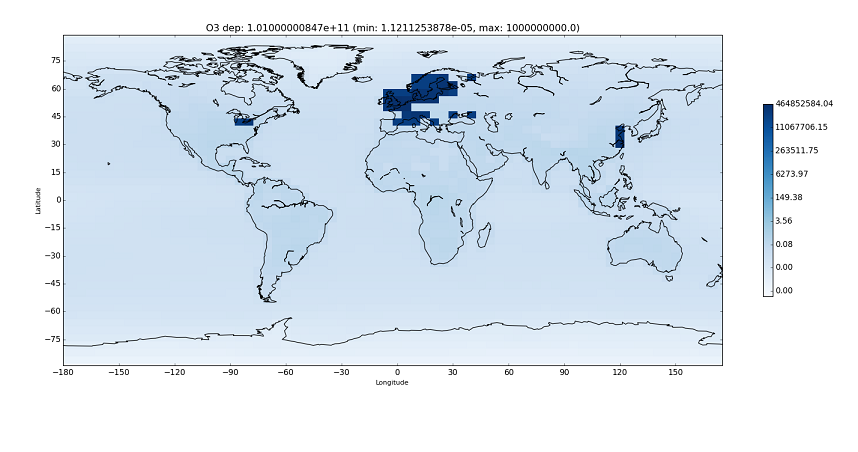 I have a solution. The attached patch file applies to v9-02-Public-Release with the parent commit "Clean up use of State_Met in several modules". This supersedes and replaces my previous patch file that is currently posted on the wiki here.

The wiki description of my changes since v9-02 is still accurate. The substantive difference between this patch and the previous one is that when O3 is lost in sub-grid-scale ship plumes, the loss is calculated by the chemical solver using a 1st order rate coefficient from paranox.

My patch requires adding the following new reaction to globchem.dat

I have not used KPP and haven't updated the KPP files.

Outstanding issues not yet resolved