To use the years 2015 and 2016, make sure that your HEMCO_Config.rc file has the text in GREEN. (For clarity, we have omitted file names and other information from to better highlight what has changed.)

Starting with GEOS-Chem 12.0.0, all GEOS-Chem 1-month and 1-year benchmarks (which now use met field year 2016) will use GFED emissions for 2016, instead of cycling 2014 (which was previously the last year of available data). 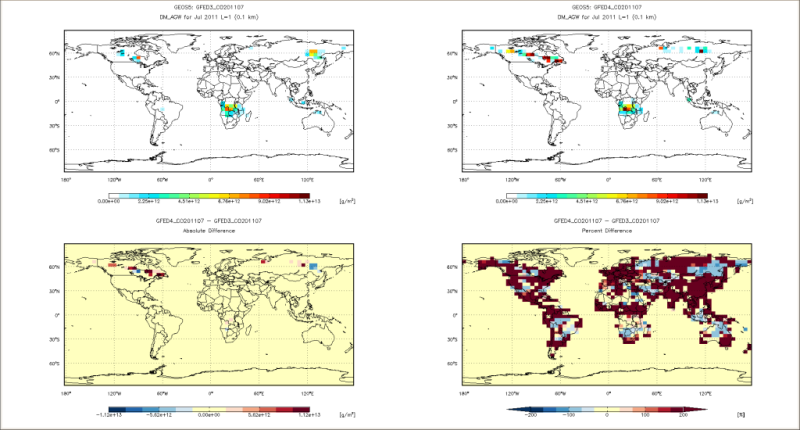 I was looking through the GFED4 emission factors in v11, and realized they appear out of date from is currently on the website (http://www.geo.vu.nl/~gwerf/GFED/GFED4/ancill/GFED4_Emission_Factors.txt). This table appears to have been posted last June.

I put the table online into the HEMCO format using Bob’s code. I also updated the burned area categories in the code to match GFED4 to avoid future confusion. Since the GFED3 burned area categories are different as you say, I was not sure how to deal with a few things like Hg0 etc that are needed for the model but not standard for GFED. I cc’d Emily since she also made some changes for her PAN paper that I am not sure are properly represented anymore.

When I used GFED3 emission factors with GFED4 burned area files, I did something pretty simple. Here is the mapping as I remember:

So, now GFED4 emission factors corresponding to GFED4 burned area categories should be used. But the GFED3 code should not be changed. But you seem to gave changed the GFED3 part of the code?

In fact, we should now just get rid of the GFED3 option.

I translated Hg0, (and HAC and GLYX, which are not in GFED4), from GFED3 to GFED4 using Prasad’s translation. I stripped out any calls to GFED3 in the code.

Please note that this correction is now obsolete. GFED4/v2015-06 is superceded by the new GFED4 release located at GFED4/v2015-10.