On this page we provide information about The Co-operative Programme for Monitoring and Evaluation of the Long-range Transmission of Air Pollutants in Europe (EMEP) anthropogenic emissions inventory for Europe.

The data files were obtained from the EMEP website and processed by Aaron van Donkelaar.

The 2008-2010 updated EMEP emissions were validated in GEOS-Chem v10-01h. The following discussion ensued.

I'm a little surprised at the drop of more than 50% in anthropogenic SO2 and NO over Europe.

I decided to explore the large drop in emissions and have found the drop in the revised EMEP emissions that are presently available to be much lower in than what EMEP had estimated when I downloaded/reformatted the original dataset back in 2011.

It should be fairly straightforward for me to reprocess new EMEP input files based on their latest estimates, which run until 2012, if the old format is still useful post-HEMCO.

For now I would not recommend using the EMEP files originally slated as part of this update. Rather, I would suggest that I/we update the emission based on the latest EMEP inventory.

The original updated EMEP emissions for 2008-2010 (generated in 2012) were found to be too low in 1-month benchmark v10-01h, so Aaron van Donkelaar reprocessed EMEP anthropogenic and ship emissions of CO, NH3, SO2, and NO for 1990-2012. The reprocessed data file is in netCDF format and includes data that has been mapped from the original 50 km grid x 50 km grid onto a 0.1° x 0.1° grid. Regridding to the finer 0.1° x 0.1° resolution allowed these input files to maintain a reasonable representation of their original grid characteristics, thereby permitting HEMCO to more accurately regrid onto a variety of GEOS-Chem grids. This file is read with the HEMCO emissions component and will be validated with 1-year benchmark v10-01h-Run0.

Please also note the following fixes that are relevant for GEOS-Chem v9-01-01 or older versions:

I noticed that the code crashes when EMEP is set to false but ship emissions from EMEP are true in the input file. Sure, it makes sense, but I would suggest the following addition to the input_mod.f, around say around line 1550 to prevent the code from crashing.

Good catch. We've put this code into READ_EMISSIONS_MENU in input_mod.f:

As you pointed out the simple solution is to just turn off LEMEPSHIP if LEMEP=F. However, it may still be possible to keep LEMEPSHIP turned on...one would have to go thru emep_mod.f to make sure that the ship emissions arrays get allocated even if the other arrays don't. Whoever wants to can feel free to do that...

I am trying to do some simulations with 1985 emissions, but I find that I run into an SST error.

It looks like a bug in initialisation of EMEP ship emissions for CO and NOx.

So after allocating EMEP_CO_SHIP or EMEP_NOx_SHIP we initialize EMEP_SO2_SHIP to 0d0. A typical problem of copy/paste.

You should change the lines to initialize the appropriate ship arrays to 0d0:

In GEOS-Chem v10-01 and newer versions, EMEP ship emissions are now implemented through the HEMCO emissions component. This fix was implemented into HEMCO.

As a solution I updated the mask file to correspond with the new border of the EMEP emissions domain. I cut of the mask west of 30W and north of 70N. This fixes the problem.

NOTE: This issue was ultimately resolved in GEOS-Chem v9-01-03g.

In routines READ_EMEP_UPDATED and READ_EMEP_UPDATED_05x0666 of emep_mod.f, there were some IF statements that were used to pick the proper filename and tracer number with which to read data from the bpch file format:

where TRACER is passed to these routines via subroutine calls such as these:

The problem is the code is set up to assume that IDTNOX will always be 1, IDTCO will always be 4, IDTSO2 will always be 26, and IDTNH3 will always be 30. This is true only if you are running a full-chemistry simulation. However, for an offline-aerosol simulation NOx and CO are undefined, and SO2 and NH3 will not equal 26 and 30. Therefore, the IF statement will not return the proper file name and tracer ID.

The solution is to remove all references to IDTNOX, IDTCO, IDTSO2, IDTNH3 from that section of code. The new code looks like:

There are a couple more instances of this error in emep_mod.f, but the fix is the same.

Update 8/1/11: Implementing this change causes the 1-month standard benchmark simulation to have divergent results than the previous version. Therefore, we should understand the source of these differences before we add this update into the standard repository.

Update 11/28/11: Patrick Kim tested this and found that the numerical discrepancy was being caused by ISORROPIA. Therefore we will add this fix into GEOS-Chem v9-01-03.

My quick fix is to shift the minimum latitude of the EMEP mask up by 1 degree latitude (so starting at 31 deg N instead of 30 deg N), in an updated mask file EMEP_mask.geos.1x1.20151222.nc. (The boxes that were removed show up as RED in the plot below.) 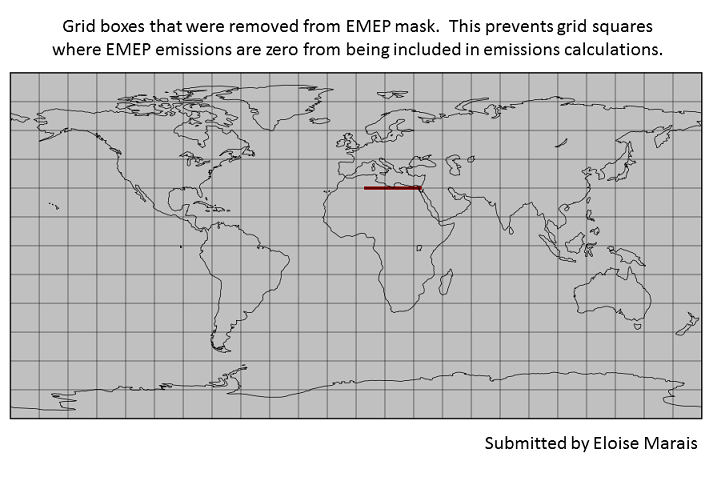 As of 06 Jan 2016, the GEOS-Chem Support Team has placed the updated mask file into the following HEMCO data directory:

We will validate Eloise's update with the 1-month benchmark simulation GEOS-Chem v11-01f. This will involve changing the EMEP mask filename in the proper HEMCO_Config.rc files.

NOTE: The old mask file (EMEP_mask.geos.1x1.nc) shall be preserved for backwards compatibility.

I am surprised by the differences in CO emissions between v11-01d and v11-01f. I was struck by how large they seem to be. What first caught my eye was the difference in boundary-layer CO mixing ratios in Cairo - and it looks like it is related to a big change in anthro+bifuel emissions in one grid box....Is there a simple explanation for this?

Differences in the anthropogenic+biofuel CO emissions in Cairo were caused by the updated EMEP mask file introduced in v11-01f. Eloise Marais found that EDGAR emissions were zero at 30N because the EMEP mask extended too far south, so she provided a new file that shifts the EMEP mask north by 1 degree.