On this page we discuss various programming techniques that we have used to prepare GEOS-Chem to run in High-Performance Computing (HPC) environments. Please also see our GEOS-Chem HP wiki page.

The following changes were made to GEOS-Chem v9-01-03 and higher versions:

Since GEOS-Chem v9-01-03, we have rewritten most of GEOS-Chem's subroutines and functions to accept derived-type objects passed as argumetnts. A derived type object is a data structure that can hold several individual variables (think of an object as a "bucket of variables").

We use the following objects to pass data between subroutines and functions:

With this approach, passing additional variables to subroutines and functions is as simple as adding the variable to one of the above objects. (Think of dropping a new "variable" into the "bucket", and then passing the bucket around.)

Since GEOS-Chem v9-01-03, we have started replacing unformatted binary I/O (i.e. the "binary punch file format") with netCDF I/O. This is a necessary step towards running GEOS-Chem in high-performance computing (HPC) environments.

The HEMCO emissions component, which was introduced in GEOS-Chem v10-01, now reads emissions and related data from COARDS-compliant netCDF files. This allowed us to remove much of the legacy emissions code from GEOS-Chem. We also converted our existing emissions data from binary punch format to netCDF format for HEMCO.

As of this writing (prior to the GEOS-Chem v11-01 release), we are working towards replacing the existing GEOS-Chem diagnostics (which archive data to binary punch format) with netCDF diagnostic output. We expect this to be completed by GEOS-Chem v11-02.

For more information about netCDF, please see our Preparing data files for use with HEMCO wiki page.

Restricting screen and log file output to the root CPU

NOTE: This feature was implemented into GEOS-Chem v9-01-03, release date 14 Sep 2012. We continue to add this feature to new GEOS-Chem routines.

You will see several statements such as WRITE( 6, 100 ) or PRINT* placed throughout the GEOS-Chem source code. These statements will print text to the Unix stdout stream. (Stdout is Unix-speak for the text that gets printed to your screen.) As described in Chapter 6.2.1 of the GEOS-Chem Users' Guide, you can redirect the stdout stream to a log file with a command such as:

This command is known as a redirect.

GEOS-Chem currently uses OpenMP, which parallelizes individual DO loops. Because GEOS-Chem's WRITE and PRINT statements mostly occur outside of parallelized DO loops, this means that only one CPU (the "root CPU") is trying to write text to stdout.

GEOS-Chem will connect to the NASA GEOS-5 GCM via an interface that utilizes the Earth System Model Framework (ESMF) library. ESMF employs Message Passing Interface (MPI) parallelization to run the combined GEOS-Chem/GEOS-5 GCM on hundreds of CPUs. Each individual CPU will execute its own GEOS-Chem simulation for a small sub-domain of the world (i.e. a single vertical column or group of several adjacent vertical columns). The sum total of all of these individual simulations will comprise the global GEOS-Chem/GEOS-5 GCM simulation.

When using MPI parallelzation, all GEOS-Chem processes—including writing text to stdout—will occur on each of the CPUs on the computational cluster. In order to avoid writing the same text messages over and over to stdout, we must take some extra precautions. We have chosen to restrict printing informational text messages (other than error messages) to the root CPU. However, we must also allow these text messages to print when GEOS-Chem is used in the traditional manner.

Starting in GEOS-Chem v9-01-03, you will see a new argument, am_I_Root, passed to many of GEOS-Chem's key subroutines. Right now we have focused on adding am_I_Root to routines that are part of the Chemistry Component. (In the future we will extend this to all GEOS-Chem subroutines.) We use am_I_Root to wrap existing WRITE and PRINT statements.

If you looked at subroutine READ_INPUT_FILE (in input_mod.F) from GEOS-Chem v9-01-02 or previous versions, you would have seen these WRITE statements:

But in if you look at the same subroutine in GEOS-Chem v9-01-03 and higher versions, you will see this code:

The am_I_Root argument sets apart all WRITE and PRINT* statements. If you are running a "traditional" GEOS-Chem simulation (i.e. without connecting to the GEOS-5 GCM), then am_I_Root is set to .TRUE. in the driver program main.F:

and is then passed to READ_INPUT_FILE and other lower-level GEOS-Chem subroutines.

For combined GEOS-Chem/GEOS-5 GCM simulations, the am_I_Root function is defined with the library function MAPL_Am_I_Root. This function returns .TRUE. if the current processor is the root processor, or .FALSE. otherwise. Any WRITE statements within an IF ( am_I_Root ) block (such as the above example from subroutine READ_INPUT_FILE) will only execute on the root CPU. This will print informational messages only once instead of hundreds or thousands of times.

Prior to GEOS-Chem v9-01-03, all logical unit numbers (LUNs) used for Fortran file I/O were pre-defined as PARAMETERs in module GeosUtil/file_mod.F, as shown below:

We assigned a unique LUN value to each different type of GEOS-Chem input or output file. This ensured that data would get written to the proper file.

When GEOS-Chem connects to the GEOS-5 GCM, however, we can no longer rely on these pre-defined LUNs. The GEOS-5 GCM assign LUNs to files based on availability. The GEOS-5 GCM will check for the next free LUN, and then use that to open a file for input or output.

For better compatibility with the GEOS-5 GCM, we have removed the pre-defined LUNs from file_mod.F. File LUNs are now made local to routines or modules instead of being centrally located within GeosUtil/file_mod.F. Eric Nielsen (from GSFC) has created a new function findFreeLUN (contained within module GeosUtil/inquireMod.F90) that can be used to search for LUNs that are not already in use. You will see the following calls to findFreeLUN wherever GEOS-Chem reads a non-netCDF file from disk:

Unlike all of the other LUNs, IU_BPCH is referred to from several different routines within the source code. Therefore, we had to leave this in n GeosUtil/file_mod.F is IU_BPCH. But we have converted this from a PARAMETER to a regular variable:

NOTE: The LUN IU_BPCH only gets used in those sections of GEOS-Chem that will not be called by the GEOS-5 GCM.

NOTE: As of v11-01, GEOS-Chem's error trapping is not completely implemented. We will complete this in a future version.

As mentioned in this wiki post, we now use derived-type objects in order to pass data between GEOS-Chem routines. A typical GEOS-Chem subroutine will now take the following arguments:

The RC (return code) argument will be set to one of the PARAMETER values contained in module file Header/gigc_errcode_mod.F90:

If the subroutine finishes normally, then we assign:

and then exit normally. On the other hand, if the subroutine dies with a catastrophic error, we assign:

As of this writing (Jan 2013), we have added the RC argument to many GEOS-Chem subroutines but we have not fully implemented the error trapping. The work is ongoing.

NOTE: We made heavy use of the DEVEL switch was used heavily when we were modifying GEOS-Chem to accept derived-type objects as input. As of this writing (v11-01), most of the #if defined( DEVEL ) blocks have been removed from GEOS-Chem. But we still continue to use this technique when we need to preserve both old code and new code in the same subroutine for testing.

In much the same way, we are adding new sections of source code to GEOS-Chem that will allow it to connect to the NASA GEOS-5/GCM. In order to prevent disruptions to the normal GEOS-Chem workflow, we have segregated these sections of new code from existing GEOS-Chem code with C-preprocessor switches. This allows us to activate the new code for testing, while leaving the existing code untouched. 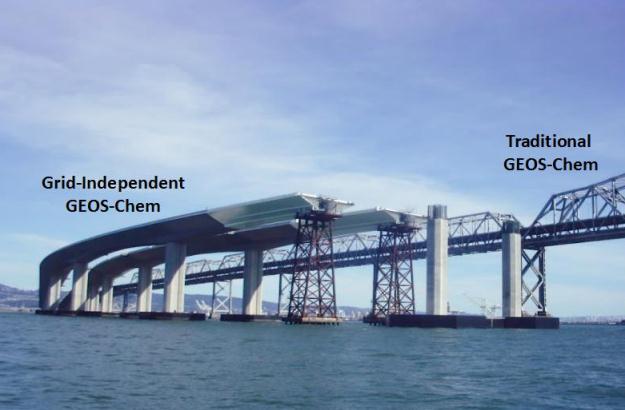 If you look through the GEOS-Chem source code routines, you will a bunch of #if defined( DEVEL ) ... endif blocks. DEVEL stands for "Development code". Source code located within these #if blocks will not execute unless you activate the DEVEL switch at compile time. You can safely ignore these #if blocks for the time being. But be aware that the new code within these blocks will eventually replace the GEOS-Chem source code.

NOTE: The STT field was removed from GEOS-Chem v11-01 and higher versions. Also, the State_Chm object is now located in state_chm_mod.F90. While the code is different in the most recent GEOS-Chem versions, the methodology described below is still valid.

We typically use the DEVEL switch to add new sections of code into existing GEOS-Chem subroutines. We frequently use this method to introduce new derived type objects into GEOS-Chem. Each derived type object is a "bucket" of variables that may hold one or more scalar or array fields. We objects to pass data between subroutines for better compatibility with the Earth System Model Framework, which controls the flow of information between components of the NASA GEOS-5/GCM.

In the example below, we use DEVEL to pass tracer concentration information in/out of the subroutine with a derived type object named State_Chm instead of using the STT tracer array.

We recognize that it is burdensome to keep both new and old code in the subroutine indefinitely. Once the new code has been validated, we shall remove the remaining sections of old code, as well as any remaining DEVEL switches.

In GEOS-Chem v9-02d and higher versions, we have standardized a significant amount of code that had been previously been set apart in #if defined( DEVEL ) blocks. The old code and DEVEL blocks have been removed from these routines.

We are currently using #if defined( DEVEL ) blocks to replace the existing STT and CSPEC arrays with fields from the Chemistry State object (named State_Chm).

In our development branch, we have integrated many of the DEVEL blocks into the mainline code. Many module arrays (i.e. met fields, STT tracer array, etc) are now replaced with derived type objects.

In many cases, EXTERNAL_GRID and EXTERNAL_FORCING can be synonyms for DEVEL. In many locations in GEOS-Chem you will see C-preprocessor blocks with all three switches, such as this one in setemis.F:

However, there are other instances where we will use EXTERNAL_GRID and EXTERNAL_FORCING without using DEVEL. The DEVEL switch allows testing of grid-independent modifications in the standard GEOS-Chem. Therefore, if we need to make modifications that will only get activated when we are connecting GEOS-Chem to an external GCM, we should exclude these from #if defined( DEVEL ) blocks.

For example, this #if block in Headers/comode_loop_mod.F allows us to use the same setting as the standard GEOS-Chem when DEVEL=yes, which facilitates debugging and comparison to the "traditional" GEOS-Chem. But if we are connecting to an external GCM, we will use a different setting.